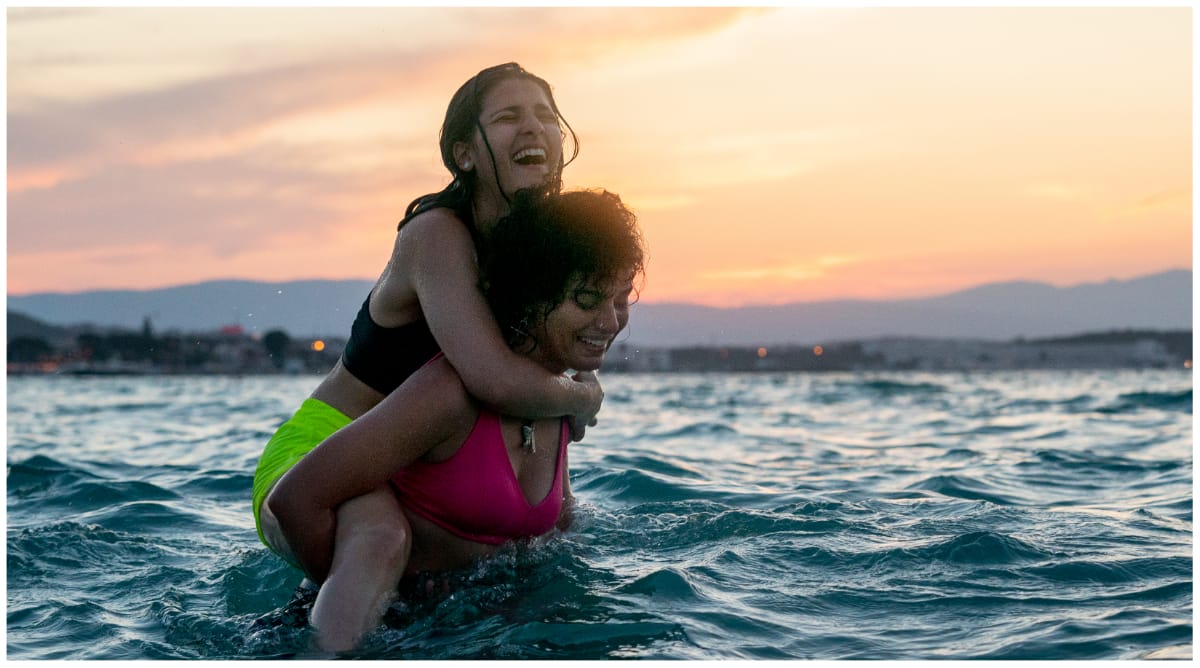 A stirring true story gets by-the-numbers treatment in director Sally El Hosaini’s The Swimmers, released on Netflix this week after a quiet festival run. Neither the title nor the film does its subjects justice. Based on the life of Olympic swimmer Yusra Mardini, The Swimmers is divided into two distinct halves. The first is a harrowing survival thriller, tracing Yusra and her sister Sara’s escape from war-torn Syria to Germany, and the second is a sports drama that rushes through her preparations for the 2016 Rio Games.

Both halves could’ve justified separate films, but mushed together, one can’t help but feel that neither aspect of Yusra’s life — she is both a refugee and a world-class athlete — is given the time and attention that it deserves. It is important for films to sometimes swim against the tide; a conflict with the viewer is often as vital as the conflict on screen. But The Swimmers glides through Yusra’s (admittedly short) life like Michael Phelps doing the freestyle on a Sunday afternoon. As a result, the quieter victories feel more earned than the grand triumph at the end. Expect waterworks after Yusra and Sara (played by real-life sisters Nathalie and Manal Issa) sight land after a torturous boat ride across the sea.

We’re introduced to the two sisters as they’re trained by their father to become champions one day, and represent Syria at the Olympics. But when the war escalates, their family agrees to send them to Europe, where the idea is for them to continue training. But there’s a sense that this is something that they say to make themselves feel better about their tense situation. The reality is that Yusra and Sara fleeing for their lives. Forget training for the Olympics at some cushy private club, little do they know that they’re going to spend the next few months fighting for their very survival.

El Hosaini and her co-writer, the great Jack Thorne, find interesting ways to highlight the sisters’ different (and sometimes clashing) personalities. As they wait for their coyote to take them to the next level of their unending journey across Europe, Yusra — she’s the younger one — spots a shooting star in the night sky. She points it out to Sara, who remarks dryly, “That’s just an angel throwing away cigarettes so Allah can’t catch him smoking.”

The complexities of their dynamic, however, remain unaddressed as the film busies itself with barreling forward. The Swimmers, in its rush to reach Rio, forgets to take in the surroundings, horrific as they may be.

Given their circumstances, and the terrible injustices that they suffer over and over again, the movie certainly comes across like a feel-good road trip drama on occasion. This is probably the worst tone that it could’ve struck. And as a result, the occasional acts of kindness that the sisters are shown along the way feel less impactful than they should.

But despite the familiar framework, there are a couple of moments where the film briefly turns into something more unconventional. In a tense early scene, both Yusra and Sara are molested by a soldier under the pretence of mandatory frisking. But what would have been the inciting incident in any other film is treated almost matter-of-factly here. It’s tragic, really. Similarly, what would have been the climax in any other film — the sisters’ safe arrival on European shores after an arduous journey — happens around 45 minutes in. It could, however, also be argued that the film is reducing important life events to mere bullet points.

El Hosaini also deserves a pat on the back for telling this story firmly from the sisters’ perspective. Why, you might wonder, does it deserve brownie points for doing this obvious? I have one word for you: Dangal. Had Aamir Khan and Nitesh Tiwari been in charge, The Swimmers would’ve probably been about Yusra and Sara’s father back home.

Sporting triumphs against the backdrop of war are ripe for dramatic storytelling. Certainly, many films have successfully combined the two elements before. The Swimmers doesn’t quite sink under the weight of El Hosaini’s heavy-handedness; it simply… floats.