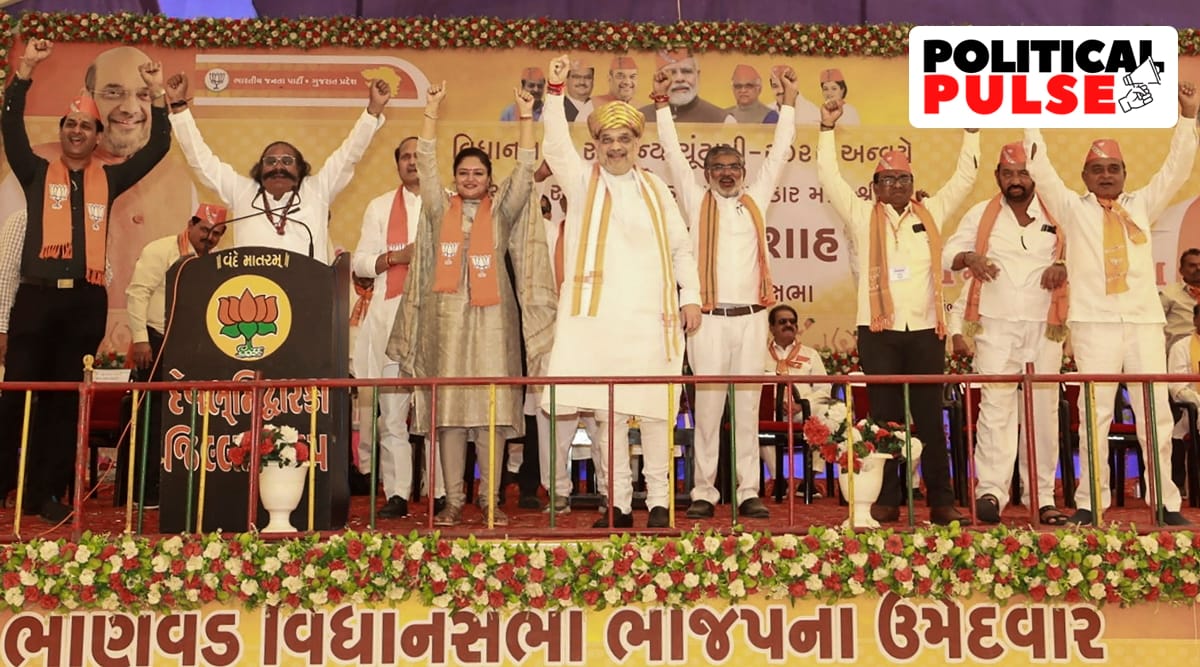 Over the next week, around a hundred structures were razed, including shops and homes and more than two dozen religious structures of the minority community, with officers claiming to have cleared area measuring 1 lakh sq feet. Police imposed restrictions on movement during this time to and from Bet Dwarka, a 36-sq km island with a population of around 15,000, located off the Okha coast.

A month later, the drive on the island, which holds the Shree Dwarkadhis Mukhya Mandir dedicated to Lord Krishna, who is believed to have set up his kingdom here, plus other Hindu temples, has become a recurring theme in the narrative of the BJP’s election campaign.

He said the drive had shown Gujarat the “mrudu ane makkam (soft and firm)” face of Patel, a description Modi is fond of when it comes to the CM. “People were revelling after constructing illegal constructions on the coastline… they were all cleared, silently… So much land (was cleared) and Bet Dwarka’s pride (restored). I noted statements of the culture lovers, saints and religious heads. It made me happy.”

Demolition drives were conducted simultaneously in neighbouring Porbandar and Gir Somnath districts, and a few dozen structures, including a dargah, were razed in these coastal districts.

Then, as the campaign for the coming elections picked up, on November 18, three JCBs decorated with flowers were parked at the entrance to the venue of a rally by Uttar Pradesh CM Yogi Adityanath in Wankaner in Morbi district. Two days later, PM Modi talked about raids on Somnath temple by Islamic invaders in the Middle Ages while addressing a public meeting near Somnath temple in Gir Somnath district. The next day, an Adityanath rally at Chowpatty Ground in Porbandar saw a JCB on the maidan.

Then, for the first time this election, the BJP mentioned the issue outside Saurashtra region, with Union Home Minister Amit Shah raising it at a meeting in Khambhat in Anand district on Tuesday. “Our Bhupendrabhai (CM Bhupendra Patel) and Harshbhai (Home Minister Harsh Sanghavi) demolished the fake mazaars in Bet Dwarka. They were all encroachments in the name of mazaars and they were cleared, but the Congress said we were polarising,” said Shah. Vowing to continue the “clean-up”, Shah underlined that the BJP government had also built the shikhar (crest) of a temple of Goddess Kali in Panchmahal distict by shifting a mazaar.

Even as Shah talked about “fake” mazaars while campaigning in Khambhat, the BJP candidate for Dwarka constituency (under which Bet Dwarka falls), Pabubha Manek, was telling voters to make up for the support he was “set to lose due to the demolition drive”. He said he had cleared the demolition “at the risk of losing votes”.

“Even I didn’t know there was so much encroachment… They (BJP leaders) asked me how much it would affect me in the elections. I said it would affect me a great deal, but it was not appropriate to stop the work due to this. So, I said demolish,” Manek said addressing a gathering in Bhatiya village. He went on to urge them to vote for him “in the name of Dwarkadhis”. “I told BJP leaders that we will tell people to work a bit harder for me… We have to offset the loss.”

All through his series of meetings Tuesday evening, Manek urged people to attend Adityanath’s Wednesday meeting in Dwarka, calling him a saint and ascetic “whose darshan was a rare opportunity”.

At his meeting in Dwarka town Wednesday, Adityanath praised the “bhavya karyakram (grand programme)” going on in Bet Dwarka for its “purnodhhar (restoration)”.

Manek, who was also present, called Modi and Aditynath God’s “chosen ones” and said people should not view them as mere PM or CM. He added: “Those who want to do good for their country, they have to do good deeds for seven lives. Our Modiji and Yogiji, when they did their fill of punya in one avatar, two, four, uptil seven, they were told (by God) that you (Modi) take the seat of Delhi and you (Aditynath) take the seat of UP, and do good with a (bull) dozer.”

Manek went on to lament that he had forgotten to park a JCB outside the venue, and that he should have done it so that “Baba (Adityanath) could know that even residents of Dwarka have started knowing him”.

While Manek told The Indian Express he was confident of retaining the Muslim vote, BJP insiders admitted that the community in Okha and Bet Dwarka that has been steadfast supporter of Manek is likely to turn away from the party.

“Manek will lose a few Muslim votes,” admits a senior BJP leader. However, he adds, “We expect to make that loss good by consolidating non-Muslim votes, which are decisive.”